Necktie stripes by the Leidsche Das.

Did you know that there is a difference in the stripes pattern between European ties and American ties!

The difference between the necktie stripes pattern of European ties and American ties.

The custom tie as shown below we made for one of our European customers. As you can see the stripes for European ties run from bottom left to top right.

The custom tie as shown below we made for one of our USA customers. As you can see the stripes for American ties run from the bottom right to top left.

Here’s a brief look back at the history of the necktie stripes pattern.

There are different versions of why this is the case and opinions are divided.

Some say that there was a difference in weaving technique, others say that imported fabric in the USA was accidentally miscut.

But if we take a closer look at the history of the necktie, here too the origin lies in military practices.

Around 1900 the British regiments each had their own motif in their regimental tie, but with each regiment, the stripes ran from bottom left to top right.

One could assume that the U.S. Army deliberately chose to distinguish itself from the British Army by choosing a different stripe pattern for its military neckties.

There is a simple explanation for the difference between the stripe pattern. When a European soldier carries his riffle in a sling over the shoulder it is the left shoulder and for an American soldier, it is the right shoulder.

Just like in Europe, this military use of the army has been taken over by the civilians in America.

If you would like to have customized ties made, please contact us using the following web form.

For information about our prices for tailor-made ties, please go to prices.

Anything is possible during the design process of your ties such as a customized necktie with stripes or custom-made neckties without stripes.

About the Leidsche Das

Custom Made Cufflinks is part of de Leidsche Das, a production and design office for custom made neckties and bow ties woven in personalized designs. Office based in Leiden, The Netherlands. Feel free to visit our website www.leidschedas.nl 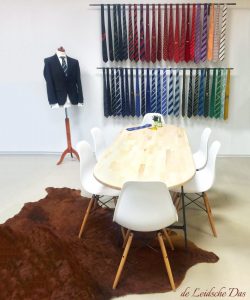